You are here: Home / Library / The Impetuous Bride 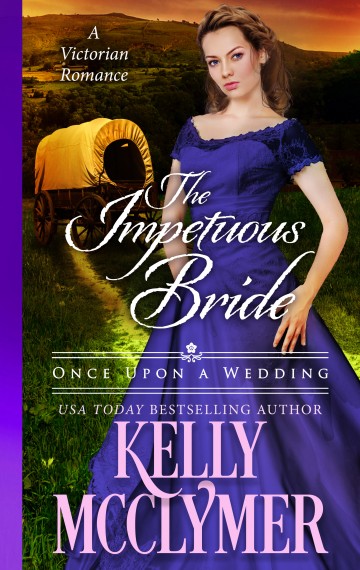 From USA Today Bestselling Author Kelly McClymer comes a story of two black sheep who find that a life of adventure brings them the most dangerous risk of all: love.

Praise for The Impetuous Bride

“Heartwarming and romantic but historic in the events of migrating slaves and immigrants. This was one of the best of this series.” — R. Ortiz

Description of The Impetuous Bride

Rosaline Fenster ran away from the altar and her proper British upbringing to avoid being trapped in London living a stiff Victorian lifestyle. After years in America, she is on a mission for the Underground Railroad to help a desperate young slave couple escape the South only to discover that her safe house is no longer safe.

Wagonmaster Rob Lewis knows an unmarried woman on his wagon train spells trouble. Especially when the unmarried lady in question likes to wear bloomers and shoots straighter than most men. But his lively young daughter needs a woman to tend to her while he gets his wagon train safely across the treacherous western terrain.

With the welfare of a young child at stake, can two wild hearts find a way to compromise long enough to make it to San Francisco?

Read the Digital Edition of The Impetuous Bride:

Listen to the Audio Edition of The Impetuous Bride:

EXCERPT from The Impetuous Bride

She began laying the cut circles of dough out on the pan. “What if I found a husband? Just for the trip. Just to keep from causing any trouble.”

Fortunately, he was prepared to scotch that hare-brained scheme. “Had a woman pretend to be married just to travel out with me. Sent her back with some Indians soon as I found out.”

She set the covered pan of dough circles on top of the stove to rise. “Where did you find out?”

Her expression told him she’d done enough reading to know what that meant. “How did you find out?”

“Her ‘husband’ took up with another woman and tossed her out of the wagon.”

She wadded up the remaining dough and lifted the rolling pin. She eyed him a bit, as though she was considering whacking him with it. But as she began to roll out the dough again, she said mildly, “Seems like he’s the one caused all the trouble.”

He couldn’t help smiling. “That’s what she said.” Not that anyone in the company had had any sympathy for her. She’d lied to them, and they weren’t prepared to forgive her for it. “She wanted me to make him return the money she’d paid him.”

“I convinced him it was the right thing to do.”

“So he was some poorer for his betrayal. Good. He should have kept to their bargain. Why didn’t you toss him out of your company?”

The thought had been tempting at the time. “It was his wagon and his livestock.”

She cut new dough circles vigorously. “What about the woman he took up with? Wasn’t she unmarried, too?”

“She had a daddy supposed to be watching for her. And he was, too. Got out a shotgun and made sure those two tied the knot right there on the trail. We didn’t even have to wait to reach an outpost; we had a preacher along with us.”

She pressed out two more biscuits with the remaining scraps of dough and added them to the ones already rising. With a sigh, she wiped the table and her hands clean. “Captain Hellfire traveling with a preacher. Interesting.”

He didn’t think for a minute she had given up. She was just trying to decide how to approach him next. “I like it. Gives folks some comfort on the Sabbath and when there’s burying to be done.”

She looked down at the outfit she wore. “I could go as a man.”

“You have no idea how much trouble you and I would be in if you got unmasked.”

For the first time, he saw a flicker of wariness cross her face. “I wouldn’t be.”

He smelled trouble. “You don’t know what’s it’s like out there. Day after day of travel, heat, insects. That spirit gum’ll irritate your face–you’ll take off your whiskers for a spell and the next thing you know, everyone in the train will be whispering. Soon enough?”

She held up her hands as if in surrender. “Okay. I take your point, Mr. Lewis. I’d rather travel as a woman anyway, for just the reasons you describe.” She appraised him impartially. “What if I had a man to look after me, just not a father or a husband, since I have neither.”

He choked. “What kind of damn fool?”

She watched him with a strange, reserved expression on her face. “I’d make it worth your while.”

Worth his while? He stood up, sending his chair tumbling away in his haste. “What makes you think I’d–”

She laughed low in her throat. “The way you look at me.”

“Never mind. It was a wild thought.”

She raised an eyebrow. “What did Caroline look like?”

The blow was low but accurate. “I know I wasn’t around much. Caroline wasn’t one to mind not having me underfoot.”

She shrugged. “Which is why I thought you might be interested in my proposition. A no-strings-attached deal that would last until we reached San Francisco.”

No strings? There wasn’t a woman alive who understood that phrase–not even Rosaline Fenster. “Forget it.”

“I promise I’d do everything you said.”

The images that chased across his mind… But no. “I don’t believe you are capable of doing as you are told, Miss Fenster.”

Read the Digital Edition of The Impetuous Bride:

Listen to the Audio Edition of The Impetuous Bride: