You are here: Home / Library / The Next Best Bride 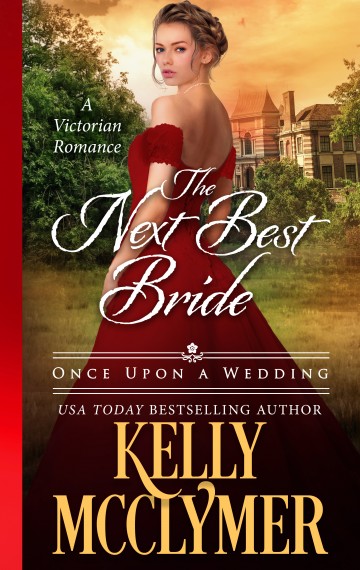 A USA Today Bestseller, The Next Best Bride is the tale an unrepentant rake’s marriage of convenience turned upside down when twins switch place at the altar.

Praise for The Next Best Bride

“This was, by far, the best book in the series so far. I loved it, and the ending was so sweetly perfect!” — Tammy

Description of The Next Best Bride

When his fiancee informs him that she can’t go through with their marriage of convenience Rand Mallon, Earl of Dalby, agrees to marry her twin sister in her place. After all, what difference does it make to him, an unrepentant rake in need only of a legitimate heir?

Ignoring her misgivings, Helena Fenster looks forward to the earl’s promise that she will be a free woman once he has his heir. Neither one of them can afford to complicate their practical plan with anything so foolish as a belief in true love, or happily-ever-after.

Dangerous sparks begin to fly, though, when the earl insists that Helena actually enjoy the process of begetting his heir.

Read the Digital Edition of The Next Best Bride:

Listen to the Audio Edition of The Next Best Bride:

EXCERPT from The Next Best Bride

“Could you be happy without your drawing?” His gaze was searching. He wanted the truth.

Without meaning to, Helena answered honestly. “No.” She held her breath, certain that he would be angry with her blunt answer.

He seemed more pleased than annoyed, when he smiled broadly and gave her shoulder an approving squeeze. “Then you do not have to live without it.”

“Don’t say a wife must put her husband’s wishes first.” He shook his head. “Perhaps if you had married some other man. But not with me as your husband. Have you ever wished to go to Paris to study with the masters upon the Seine?”

That was a wish too private to share, even with a husband who appeared to approve of her unfeminine obsession with drawing. “I could not.”

She was astonished he needed to ask. “I am not talented enough. Besides, I am a woman …. ”

He halted her excuses with a look of reproof.

“Would Ros have let that stand in her way if she had your talent?” His finger tapped against the sketch of Ros. Her sister stood fearless upon the bow of the ship, shoulders back, legs wide, a smile of anticipation lighting her face in an almost unearthly fashion.

But even Ros had to pay a price for choosing adventure. “Ros does not desire a home and family, my lord. A woman cannot have both happily, unless she is extraordinary.”

What would happen to her sister if she ever wanted her freedom and a family? Whatever it was would almost certainly guarantee unhappiness. Society frowned on women who put their own needs above those of their husband and children. Thankfully, she could not envision Ros ever wanting to settle down. No doubt her sister would be more careful than Helena had been about any lovers she took, as well. After all, Ros did not have Helena’s romantic, sentimental streak.

“Nonsense. You can have whatever you wish.” He paused. “For example, have you ever sketched a nude?”

“Many times.” She had a plaster miniature of the famed David done by Michelangelo. She knew the lines of it by heart, now.

“Have you now?” He inched a little closer, although Helena would have thought that impossible but a moment before. “Again you astonish me.”

“The lines of the human form are classic. There is no shame in sketching them,” Helena answered a little briskly, misliking the gleam in her husband’s eye.

“Still, for a sheltered miss to have a nude model ? was it your lover, by chance?”

Did he know her sister that little? “Ros would not like to be captured in so vulnerable a state.”

“Who, then, did you paint without clothing?”

She sighed. Did he know nothing of art? She should have guessed it the way he seemed to think her own work masterful. ”The statue of David. Done by the artist Michelangelo? Have you never heard of it? It is quite famous.”

“A statue?” He seemed disappointed, but not angrily so. Instead, a grin had crept wide upon his mouth, showing his dimple again. “So you have never had a living, breathing nude human form for you to sketch?”

“Of course not.” She had wished to. But William had proved shy ? or rather she had interpreted his reluctance as reticence. No doubt he had been afraid that something so tangible as a nude sketch of him might get him trapped into a marriage he evidently did not want. “It would not be proper.”

He shook his head at her as if to reprove a recalcitrant child. “You are married to me, now. I would not object.”

She struggled to strangle the scandalized gasp that emerged from her as she realized what he suggested. “I could not,” she objected. Even as she did so, Helena thought of his body as she had explored it last night. She knew, with shame, that if she had been one whit weaker, she would already have sketched him from the memory of last night.

How did he know so well what tempted her to stray outside propriety? “Imagine what talk it would cause if anyone found out.”

“What? That you had seen me without a stitch? I believe most everyone has guessed that you will have done so by now.” He grinned. “We are married, Helena. I want an heir. Generally, clothing only gets in the way.”

“Nonsense.” She realized he was deliberately trying to scandalize her and sniffed with as much disdain as she could muster while he pressed against her so very tightly. “That is why nightdresses are thin, and lift easily.”

He did not reply, merely threw his head back and laughed as if she had told a ribald joke. After a moment he stopped his laughter, with effort, and asked, “If no one were ever to know, would you wish to sketch a live nude?”

He touched her lips again, just briefly, to stop her words. “Very well then, I command it.”

“I am your husband.” His look was imperious, and she knew suddenly that he could be a very good earl, if only he would give up his profligate ways.

He commanded her to sketch his nude form? So much for his promise to let her do as she pleased. But, as he said, he was her husband. “When it suits you, I suppose,” she grumbled aloud.

Read the Digital Edition of The Next Best Bride:

Listen to the Audio Edition of The Next Best Bride: