You are here: Home / Library / Shop and Let Die 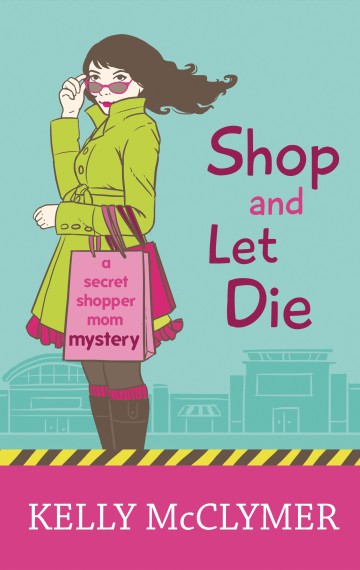 Molly Harbison hates being asked “What do you do?” more than cleaning the ring around the bathtub or digging Cheerios and raisins out of the car’s back seat. She’s tried on every possibility from a flip Domestic Goddess to a simple declarative Mom. She jumps at the chance to make some extra money as a secret shopper. But when she’s assigned to shop an online dating site…things get tricky. For one, she realizes her husband doesn’t exactly meet her checklist of “must haves” for the perfect man, not at all like her dating site Mr. Perfect. For another, the FBI wants her to actually keep her date with Mr. Perfect, who just may be the perfect serial killer.

EXCERPT from Shop and Let Die

The clerk wasn’t going to give me my receipt. Damn. She was just a kid, too. She had that glowing, wrinkle free skin of the very young.

IRENE, the orange name tag—at regulation height, just above the baby blue smock pocket—read. An old fashioned name for someone who probably wasn’t yet legal to drink. I smiled, fiddled a moment with my bag of groceries, gave her every opportunity to remember the oversight. No go.

She’d done everything else perfectly—greeted me in a friendly manner, asked if I’d found the items I was looking for, carefully scanned and packed my groceries, checking the eggs in the carton were not cracked or broken and the bread wouldn’t be crushed. To crash and burn at the last minute was heartbreaking. For me. Irene wouldn’t find out the bad news until after her shift was over.

Okay, so I shouldn’t get so wrapped up in what other people do right or—in this case—wrong. But she was so close.

Nevertheless, she didn’t give me my receipt, and I was forbidden to ask. So now poor Irene went from a perfect score of 10, down to 7. Receipts are worth 3 points. And anything less than a perfect 10 means the $25 gift certificate in my pocketbook stays in my pocketbook. Sometimes I hate mystery shopping.

Irene the baby cashier flashed me a real smile. “Have a great day.” Yep, not one fine line around her eyes.

I gave my standard customer to clerk reply. “Thanks. You too.” Feeling like a feckless double agent, I skulked away to snitch to the manager of the store, bag of groceries clutched to my chest, acutely aware I had no receipt to prove they were mine should anyone challenge me.

Unlike some of the kids who waited on me, Irene had meant her salutation. Have a good day. Poor thing. I had meant mine, too. I never wished a bad day on anyone who risked carpal tunnel on a daily basis by running other people’s twelve-packs of soda through the beeper scan thingie.

Unfortunately, after I talked to Irene’s manager and showed him his “Instant Store Score” she was not going to be having a very good day. I consoled myself with the thought that it wasn’t personal. I just had a job to do. Molly the dime store secret agent strikes again.

Whenever it all goes wrong I wonder why I do it. But I know the deep dark truth. When I was twelve, after a long summer day reading Harriet the Spy, I switched my career ambition from being a top fashion model to the anonymous observation of a secret agent. The art of the mysterious has called to me ever since.

So why was I in our local SuperiorMart playing dime store secret agent instead of traveling around the world on the CIA’s dime? Simple. Kids are not the best accessories for the trenchcoat lifestyle.

I took a moment to study the framed picture of the employee of the month on the manager’s closed door. He had a jarring smile considering his picture was positioned just above a flyer asking for any information about a local mom who’d gone missing recently. I knocked firmly, putting aside my curiosity of whether the mom would turn out to have run away from home, or been the victim of foul play.

The manager—she, not he—was an overworked, freckle-faced red head who looks up from what appeared to be a logistics schedule for a massive military invasion but was probably just the next week’s work schedule. Her nametag was blue and gave her whole name, DONNA SOMMERS, Manager. Do the people at Corporate have name tags with all three of their names? Is that how to break the nametag code: more responsibility, more names.

It took Donna a minute to register that I was not a customer complaining about something she could push off on a clerk to handle. I watched her glance toward the service desk for salvation, see the slight shake of the service clerk’s head. Donna Sommers blinked. Once.

One blink was all it took before Donna’s eyes narrowed and her shoulders squared. I was from Corporate (in an indirect way—corporate hired the company that hired the person who hired me…but still…). And she was going to deal with me professionally and efficiently, just like she’d been trained.

I politely nodded and made sympathetic noises as she assured me she has trained all her employees to follow procedure properly. This was just an oversight. I couldn’t bear to meet the efficient and sincere gaze. Definitely some wrinkles there. They probably deepened when she smiled, like mine did. Maybe. She didn’t smile for me.

I emphasized, studying the pictures of Donna’s three happy freckled kids taped above her desk, how close Irene had come, if only she’d given me a receipt. And I glossed over the fact—I was required to tell her, or I wouldn’t have been able to bring myself to do it—that she herself would have been rewarded with a gift certificate if Irene had scored a perfect 10.

By the time I got to the third part of the instant store score—cleanliness—Donna Sommers had checked her watch four times. I started talking faster, but that only made her prop her arm so she could pretend to look at the score sheet while she was really watching the time.

“Am I keeping you?” I wasn’t supposed to keep management from their appointed rounds. I’d scheduled my shop during the slow time, just like I’d been told. But slow times aren’t always slow.

She blushed bright red, to match her hair, and her freckles got darker instead of blending in. Interesting. Her sincere, steady, efficient tone of voice lowered to a whisper. “I have to pick my kids up from school.”

She stammered, still in a whisper, “It’s my break you understand, I don’t use company time.”

She didn’t have to explain to me, but the Corporate cachet attached to my presence forced it out of her. I raised my hand. “Just let me cover these last two points quickly.” I delivered my spiel so fast there’s no way she understood what I said. But it wasn’t rocket science. She knew the most important part. Her instant store score wasn’t perfect.

There wasn’t a lot of sympathy in Donna’s blue eyes as we shook hands—she’d have liked a gift certificate, too. Who knows what she might have brought home for those smiling children if she’d gotten a gift certificate. Maybe a box of cookies. Or cinnamon buns. They made good cinnamon buns at Superior Mart—which was why I needed to lose 30 pounds.

Out in the parking lot I found the evaluation form app on my phone, checked to make sure there was no one nearby to see what I was doing (spies—and shoppers—are not supposed to get caught) and quickly filled in my notes.

The clerk wore a blue button down shirt under her neatly pressed apron. Her nametag was placed just above the store’s logo. As it should be. She had short blond hair and a small tongue stud. And eyes that were clear of any worry that she’d forgotten something important because she hasn’t had children yet (no I didn’t really put in that last part—but I noticed it).

I know that look. I see it in the mirror every time I brush my teeth and my hair. I try not to. But I do. We pretend we have it together, we mothers. But there’s always that periodic lurching mindsweep: Did I remember everything?

In fact, I had one of those moments as I finished the mystery shop and looked at the form and the twenty questions I had to answer in detail in order to get paid. For a minute, when I look at the form, my mind always goes blank. Falling off a cliff would feel better. At least, until the moment I hit. So far, at least with mystery shopping, all the necessary details have flooded in and I’ve gotten excellent scores on my mystery shopping reports. Oh yeah, we spies who rate others get rated too. Life’s fair that way sometimes.

With the contents of my memory safely recorded on my smart phone, I got behind the wheel and started the car. I didn’t pull out right away because I didn’t want to attract the notice of Donna Sommers, who had just come out of the employee door, moving at the speed of a supermom, and climbed into her beat up SUV.

She didn’t close the door immediately. Instead, she lit a cigarette, leaned over, closed her eyes, and took three deep drags. Without exhaling, she then tossed the smoking remains to the asphalt, closed her door and backed out of her parking space at warp speed.

Fortunately, I had already written my report on the condition of the parking lot, so I didn’t have to record that cigarette. But as I did my usual mindsweep to make sure I hadn’t forgotten anything important, I looked at the dash clock. Kids. School. Go.

I peeled out in the opposite direction from Donna Sommers to avoid any unintended eye contact. Time to put Molly the spy away and become Molly the supermom. Supermoms can leap through yellow lights and use the special supermom warp speed to make the ten minute trip to school in five minutes.