You are here: Home / Library / The Twelfth Night Bride 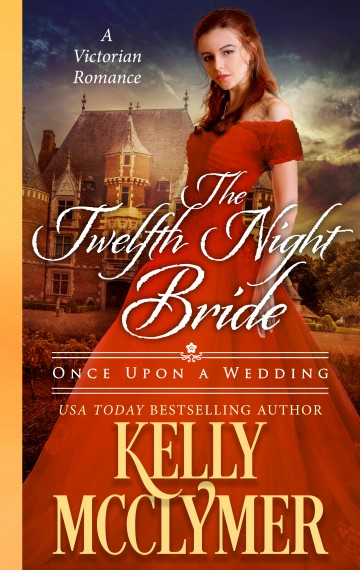 Christmas is a time for miracles, or so Kate Fenster, the youngest of the Fenster siblings, hopes when she heads to Ireland to confront her absentee bridegroom.

The Earl of Blarney had called in her childhood promise to marry him. It had been a lighthearted bargain, she would marry him if he let her ride his prized stallion Diablo. Charmed but not quite trusting the silver-tongued Irish lord, Kate sets him to prove he is more interested in her heart than her dowry.

The courtship takes a dark turn when, just hours after their wedding, her bridegroom is called home to Ireland and refuses to return to her in England or allow her to come to him in Ireland. Kate, tired of waiting, must travel to another country to face her husband — and the fact that everything he had told her was only half-true. Now it is her turn to prove herself to him. To prove that she is the right wife for him. The one who will stand by his side while he rebuilds his lands, regains the trust of his people, and keeps his mad, fey sister safe.

Read the Digital Edition of The Twelfth Night Bride:

EXCERPT from The Twelfth Night Bride

Kate slapped the man who had just kissed her. “You presume too much, Mr. McCarthy.” She regretted her action as soon as she saw the white handprint standing out starkly on his cheek.

Niall McCarthy laughed and plucked a berry from the mistletoe above their heads. “Your husband has asked me to watch over his bride until he can return for her. Surely he would want you well kissed under the mistletoe, even if he is not here to do the job?”

Kate moved away from the greenery she had not seen in time to avoid. “Your humor leaves much to be desired, as does your kiss. I thought you would not come this year, Christmas is but three days away.”

“So serious,” he chided her. “This is not the season for frowns and sighs. Haven’t I been a faithful watchdog, keeping you company while my cousin cannot?”

The unrepentant man pulled a letter, tied with a ribbon and sealed with Sean’s maroon wax, from his breast pocket. “Delivering his letters so that you know he is still alive? Delivering yours so that he might not return to a stranger after all this time?”

“I thought so, but now I doubt it.” Kate held out her hand. “What is his excuse this time? He is afraid to sail the seas in winter? He has lost his soul to the devil?”

“I think you chide the wrong person. I am not my cousin. What have I done to cause you to doubt me, but deliver his husbandly missives?” He held tight to the letter as he put his hand to his heart and affected a distressed expression, but she was not fooled. Niall McCarthy was not a lighthearted man at the moment.

Kate sighed and wiggled the fingers of her outstretched hand. “Perhaps I’d have more faith in you had you delivered my husband to me, instead of his letters.”

“You cannot blame Niall for your husband’s absence.” Miranda stirred by the fire, where she sat cradling her sleeping son Sinclair. The toddler looked almost angelic in his mother’s arms, thought awake he had the force of a mighty windstorm. Four year old Gillian sat at her mother’s feet, drawing. The child had inherited her artistic ability—and her intensity—from her aunt Helena.

“There, see? Even the duchess knows that I am innocent.” Niall placed the letter in her hand with a bow and a flourish.

Kate closed her fingers. Thin. One sheet. He had not had much to say in reply to her last correspondence. Obviously he was not to celebrate Christmas with her in England, as she had requested. The only question that remained was whether his answer to her alternative was positive or negative. Would he allow her to come to Ireland? Or would he refuse her again, with some ill-reasoned excuse?

“Are you going to open the letter, or try to read it through the folds?” Miranda asked quietly, so that she did not wake her son. Gillian looked up abstractedly from her drawing paper, found nothing of interest in faces of the adults around her, and went back to her work.

Kate loved the children, but seeing how they had grown only reinforced the years of her life that slipped by, sometimes so easily that she did not notice until Christmas, when yet another year of her marriage had passed.

“I’ve written him, as you suggested and I’m afraid to see what he’s replied.”

“What did you ask?” Niall had moved to stand by the fire, and his expression was more wary than Kate liked. Had Sean told his cousin her request? No, better to say her demand.

She held her breath as she broke the seal and unfolded the paper.

It is for the best, Kate. All the world would not make a racing horse from a donkey. I should have known it long ago.

Yours, one last time,

He had signed it with his usual scrawling flourish. But what did it mean? Was she the donkey, or was he? Why could the dratted man never speak straightforwardly to her? He professed love and devotion in pretty phrases that, in the end, were no solace in her lonely bed, no matter how carefully she stored them, or how many times she read them to herself by candlelight.

She looked at Niall’s carefully averted profile and the words to ask fled her as her throat closed in fear.

Her struggle to breathe, to find the words to ask what she most feared to hear, ceased when the duke came into the room in as undignified manner as she had ever seen. His glance first went to Miranda, who sighed a moment, as if he had conveyed all in that one quick glance. And then he looked at Kate.

At first she thought his banked fury was aimed at her. But then he turned his gaze upon Niall and Kate was astonished the man did not turn to ash at once, such was the heat of the duke’s glare. “What is the meaning of this?” He held up a thick sheaf of papers.

Niall replied defensively, “I only carry the letters, my lord, I do not read them.”

“Did your cousin not tell you what you carried?”

“His business is none of mine.” Niall said stiffly.

The duke snorted. “This certainly is. He intends to sue you for alienating his wife’s affections.”

“That’s absurd.” Niall rubbed his cheek absently. “The lady has never treated me more fondly than any cousin should be treated.”

“Apparently your cousin does not agree.” Simon moved forward into the room, and then stopped, as if not certain whether he should go to his wife, his sister-in-law, or to deal with the man who stood by the fire. “He has informed me he intends to divorce Kate. Because of you.”

There was no sound for a moment, such was the shock at his announcement. As he stood uncertainly in the center of the room, Gillian dropped her pad and pen and ran to him. The child was unaware of the distress of the adults, and only wished to greet her father. She held up her arms to him, “Papa, I missed you today.”

With a troubled look, the duke pulled her into his arms and kissed her cheek gently. “I missed you too, sweetness. Have you been a good girl for your mother.”

Divorce. The word echoed in her mind. Kate had been surrounded by happily married couples—even her sister Rosaline, who had sworn not to marry, was happily wed to a wagon train master, of all people. Only Kate had no husband to share her bed. How could he divorce her, when he had never been a true husband? “Whyever would he divorce me?”

The duke set his daughter onto her feet and whispered in her ear. He did not speak until the girl had skipped off to complete whatever errand he had sent her to accomplish. “Whyever does any man divorce his wife? Sean claims that his cousin has stolen your affections for him. He wishes to set you free so that you may be together.”

“That is sheer nonsense. I’ve no more affection for Niall than I do for one of Gillian’s kittens.” Nonsense. Of course it was. Just as was her silly belief that his letters promising to come for her soon. She spoke the truth even as she realized it herself. “He wants to be rid of me. He has always wanted to be rid of me.”

Miranda spoke soothingly, “Perhaps he has heard some foolish rumor—”

She interrupted her sister’s attempts to calm the room. “There is no perhaps. Even if he has heard a rumor, he has no call to believe it without speaking to me. I’ve waited long enough. I know what I must do, and I intend to do it at once.” Five years. Waiting for Sean to explain why he did not send for her. Why he sent occasional letters asking for her patience, claiming that one more item must be taken care of before he could rejoin her.

Niall McCarthy, Simon and Miranda all stared at her apprehensively. “What do you mean?” Miranda asked, the sharpness of her tone waking Sinclair.

Kate spoke decisively, though her heart beat at twice its normal rate. “I am going to the abbey.”

The duke shook his head and straightened forbiddingly. “I don’t think that’s wise.”

Kate had no intention of being dissuaded. “You’ve said that before, your grace, but this time I have no choice.”

“I’ll come with you, then. We can both explain it to him. No doubt he will see reason.” Niall did not sound at all enthusiastic at the idea.

“Don’t be absurd. If you were to accompany me, Sean would have all the evidence he needs for his divorce, Niall. No. This is something I must do for myself.” She turned to Miranda, who cradled Sinclair against her as if Kate had sworn to take the baby with her. “I should have done it years ago. I would have.” But she, fearless Kate, had been too afraid to see the truth. Had been more willing than the most gullible child to believe her sister’s certainty that Sean would one day send for her.

She felt the choking fear leave her as she made her decision. “I’m going—and this time no one will stop me. If my husband wishes to divorce me, he shall do me the courtesy of telling me so to my face.”

Read the Digital Edition of The Twelfth Night Bride: