You are here: Home / Library / The Unconventional Bride 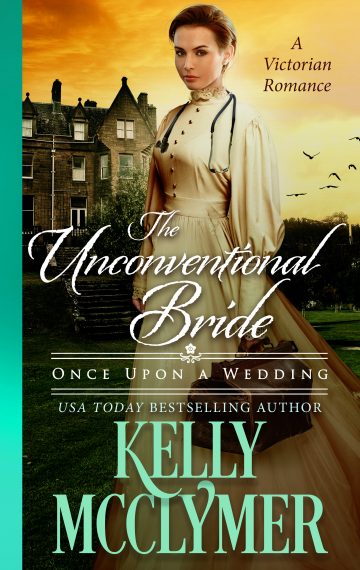 Susannah Hopkins thought she had the world at her feet after conquering medical school and lining up a dream appointment as the resident physician at Wellburn Orphanage, until her best laid plans go awry.

Thanks to an obstinate member of the orphanage’s Board of Directors, the newly minted doctor finds herself packing off to the gloomy halls of a manor called Thornfield, just outside of a tiny New York hamlet.

Far from home and her lofty aspirations alike, Susannah finds new purpose in an unlikely place: the heart of her determined young patient, and the pale
blue eyes of one Lord Stephen Camden. Can she forge a new future from the ashes of her dreams and melt the ice protecting Stephen’s wounded heart?

PreOrder the Digital Edition of The Unconventional Bride:

EXCERPT from The Unconventional Bride

Never had a city been such a welcome sight as Boston to Susannah’s eyes. She welcomed the bustle of crowded city streets with open arms. Geneva had not been an empty meadow by any means, but New England’s seaport jewel was her home, and it had a special place in her heart.

She couldn’t keep the smile off her face as she headed down the street, away from R.J. and Juliet’s house, away from all that reminded her of Susannah Hopkins as she used to be. R.J. had made offer of the carriage, but she’d firmly declined, much to his displeasure. He never liked the idea of his sister traversing the city streets alone.

Susannah, on the contrary, welcomed the solitude. She had grown used to walking by herself in her male guise—Boston, she had decided, would be no different. Besides, she knew the route to Dr. Abernathy’s orphanage by heart.Wellburn Orphanage sat on a little side street just off the main road into downtown, well shaded by the green, early-summer canopy of overarching trees. Last she had laid eyes on it, the building was a run-down armature of brick and stone, but as she approached, she saw the place had gotten a new façade. Gone were the crumbling corners, the cracks in the masonry, the slightly crooked sign perched precariously above the front doors. The steps were new, and so was the porch—no more hollow footsteps over potentially decaying wood. Susannah glanced around at the porch furnishings: a whole set of homey rocking chairs, a charming wicker seat with a floral cushion. The smile returned to her face. It felt, in a way, like coming home for the second time.
Her knock at the door was sharp and cheerful, just like her. She adjusted her clothes and her posture as she waited, feeling a twinge of nerves. Dr. Abernathy’s letter of invitation burned a hole in her handbag, just in case anyone should dare try to challenge its authenticity. Her fresh start was so close she could nearly taste it.

Then she heard footsteps on the other side of the threshold, and she straightened up. Her heart thumped in her chest.

“Ah, dear Susannah!” The good doctor himself opened the entrance and greeted her with his customary warm smile. “It’s absolutely wonderful to see you!” Just the sight of Phineas made vivid memories of her schoolgirl flirtations with him flash through Susannah’s mind. She pushed them ferociously away. He was her colleague now, and those feelings had long since cooled.

She was much more interested in forming a professional connection these days, one that might eventually help her advance her career.

Susannah took Abernathy’s offered hand and stepped across into the orphanage’s front room. “Likewise, Doctor,” she answered, casting a glance around the inside of the hall. “I am so pleased to see Wellburn looking so lovely!”
“Yes, yes.” Phineas beamed. “The influx of funding as of late has certainly been well needed, as you know. I have great hope for the future of this place, Susannah. And I can think of no better physician than you to complement our existing staff.” He took her hand again, this time to shake it. “Many, many congratulations on your fine work, from one doctor to another.”
Susannah’s heart fairly burst with joy to hear her title acknowledged out loud for the first time since graduation, in a context that really mattered. All her doubts and anxieties evaporated in a wave of contented relief. She laughed at herself for even thinking she might need that letter.
The promise she had been made was being kept right before her eyes. Everything was as it should be.

“Thank you so much.” She returned his brilliant smile. “It is all truly a dream come true.”
“As I am sure you will be, for the children.” Dr. Abernathy clasped his hands together. “Shall we get started? We’ll have you reacquainted in no time at all.”

“I look forward to working with you, Madame Cromwell,” she said sweetly. “Thank you ever so much for your time.” She received no reply. The stern matron returned without another word to her perch in the back of the hall, and Dr. Abernathy ushered Susannah back into the
corridor.
The doors closed behind them, and he let out a heavy sigh. “My sincerest apologies, Susannah. Virginia can be exceptionally difficult at times.” He fretted the edge of his sleeve.
“Her threats are more for show than anything. As far as I am concerned, nothing about your position at the orphanage has changed.” He paused. “I will, however, keep you up to date on any relevant developments.”

There was a distinct undertone of worry that Susannah did not much care for, but she couldn’t press him for more. Instead, she simply said, “Please do. I would very much appreciate it.”